Definition: lasers with a doped fiber as gain medium, or (sometimes) just lasers where most of the laser resonator is made of fibers

close
Fiber lasers: The state of the artApril 2012

Fiber lasers: The state of the art
Fiber lasers are compact and rugged, don't go out of alignment, and easily dissipate thermal energy. They come in many forms, sharing technology with other type of lasers but providing their own unique advantages. 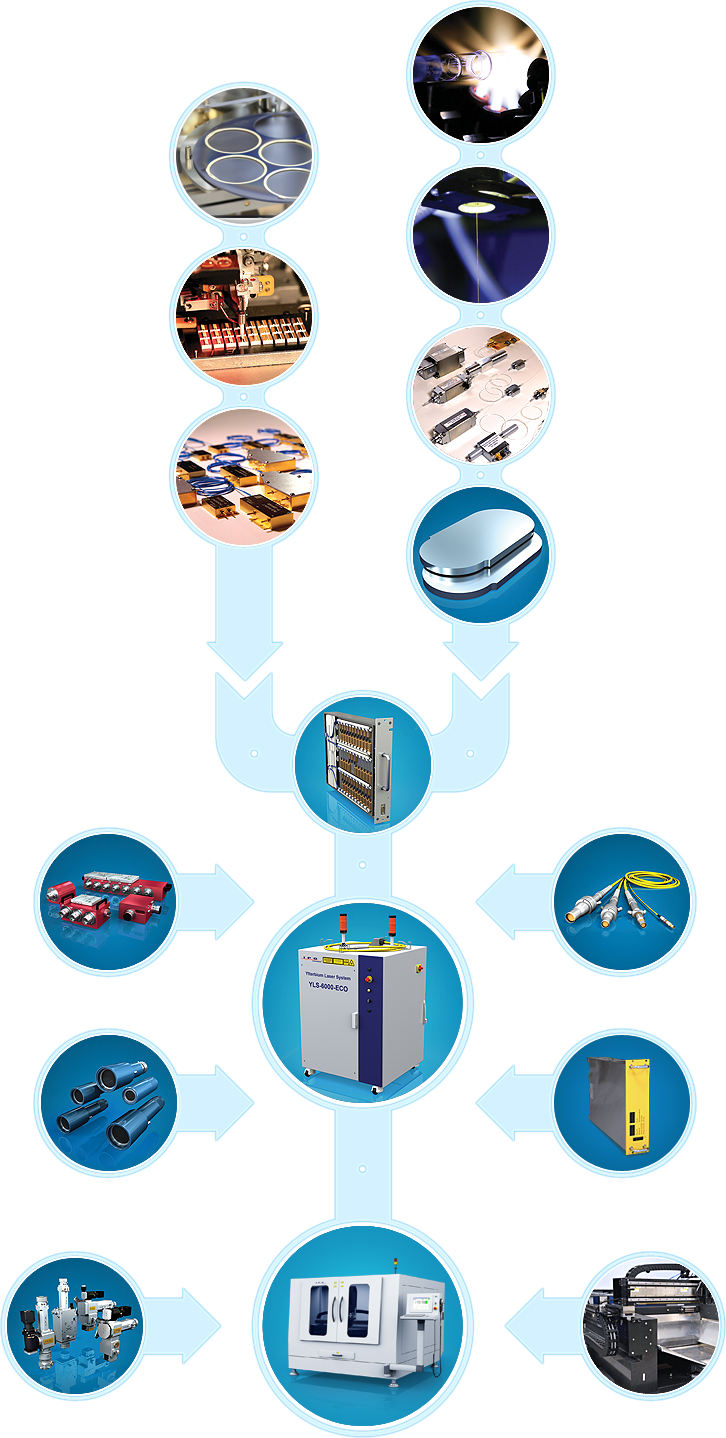 Valentin Gapontsev hated depending on suppliers. So he did away with them.

Valentin Gapontsev was fed up with outsourcing. His company, IPG Photonics, based in Oxford, Massachusetts, had several long-term contracts with manufacturers in the U.S. and Austria to produce vital components for its lasers. When the Nasdaq crashed in 2000, taking the market for IPG's products with it, Gapontsev tried to renegotiate the terms of those contracts. One U.S.-based supplier refused to budge. Even worse, it filed a lawsuit and threatened to seize IPG's assets if the company didn't hand over $36 million by 2002.

That's when Gapontsev, a self-described control freak, made a vow: He would never outsource again. It wouldn't be easy, but he decided to do away with suppliers altogether. "More outsourcing would be absolutely the worst thing a company like ours could do," he says. "If we could control the price, quality, and quantity of our components, I knew we could control our own destiny."

Gapontsev's plan sounds radical. The overwhelming trend in business today is toward sending more, not less, production out of house. But many companies are finding it difficult to manage outsourcing, particularly when dealing with suppliers in far-flung countries like China and India, says Bill Swanton, a manufacturing analyst at AMR Research in Boston. After factoring in headaches such as long lead times and poor quality control, some businesses are deciding that it's just not worth it. The rise in counterfeiting is also making high-tech manufacturers wary of handing over intellectual property to foreign vendors. "A growing number of manufacturers have decided to keep their secret sauce here," Swanton says.

That's precisely what IPG has chosen to do. When Gapontsev--a laser glass researcher at the Russian Academy of Sciences for 25 years--founded IPG in Moscow in 1991, one of his main motivations was to gain control of his livelihood. "I wanted independence," he says. "Starting a business gave me freedom." From the outset, he was determined to build a hands-on company run by engineers, not by marketing experts or finance people.

In 1998, Gapontsev moved his headquarters to Oxford to capitalize on the technology boom, and sales began to take off. By 2000, IPG had become a primary supplier of lasers that pump information along fiber-optic cables to the world's major telecommunication providers, including Lucent Technologies and Italy's Marconi. Thanks to the buzz surrounding the telecom industry, IPG--with manufacturing facilities in the U.S., Germany, Italy, and Russia--raised $100 million from investors in 2000 and was preparing to go public. When telecoms started to tank, he knew he had to make a drastic change.

It wasn't easy. Like many U.S. manufacturers that are opting to stay local, IPG was forced to invest heavily in highly automated production facilities to cut costs. In 2001, Gapontsev plowed the remainder of a recent round of financing, more than $45 million, into an ambitious overhaul of IPG's U.S. and German locations. The Oxford campus, which was completed last year, now boasts 125,000 square feet of laboratories, offices, and automated production lines that use robotics to assemble parts. To staff the facility, Gapontsev tapped local community colleges and universities, including MIT. He also hired several independent distributors to set up sales offices in Korea, Japan, India, and the United Kingdom. IPG now employs 750 people at eight locations worldwide, compared with 202 in 2000.

Gapontsev's workload has increased accordingly. He still calls most of the shots at the company and spends two or three weeks each month traveling around the globe to check in on each location and to visit key customers. "I racked up 500,000 frequent-flier miles last year," says Gapontsev, who owns homes in the U.S., Germany, and Russia. IPG's chief financial officer, Tim Mammen, is on the road almost as much, coordinating lines of credit with local banks, overseeing finances at each location, and keeping an eye on currency fluctuations. To streamline its accounting process, IPG recently installed a new Web-based system that will link the financial information from each office.

For the first time, IPG is equipped to produce every critical part of its lasers, from diodes, which generate the laser's burst, to fiber cable, which transmits the laser beams. Thanks to the streamlined production process--not to mention lower shipping bills and the elimination of premiums charged by vendors--IPG now spends less money making its own components than it did buying parts from suppliers. Diodes, for example, are 90 percent cheaper to produce in-house. The savings let IPG charge less than its rivals, which has helped it corner 65 percent of the $123 million fiber laser market.

IPG's sales, which bottomed out at $22 million in 2002, jumped to $96 million last year. Having settled the lawsuit with its former supplier in 2003 for an undisclosed sum, the company has been profitable the past two years, Gapontsev says. With a vertical supply chain in place, he is focused on making inroads into new markets. IPG's lasers, which cost anywhere from a few dollars to a few million dollars, are now used to remove facial wrinkles, destroy munitions stockpiles in Iraq, and cut metal used in industrial projects. Gapontsev, 67, is enjoying the ride. Now that IPG is back on track, he has no plans to hand over the reins anytime soon. An IPO is still a possibility, he says, as long as he remains at the helm. "I didn't build this company to sell it and play golf," he says. "I built it to sustain it."